The coldest period in the northern hemisphere is late January so here I present temperature charts for the years 2008, 2012 and 2014, each for the same date and time.

In 2008 central Greenland was very cold but not Siberia or Canada and the 10C isotherm travels to the north of Scotland.

In 2012 Greenland was a little less cold but vast areas of Siberia and Eastern Europe have cooled down considerably and colder air has moved a little further beyond Hudson Bay in Canada. The 10C isotherm is still north of Scotland but further to the west. 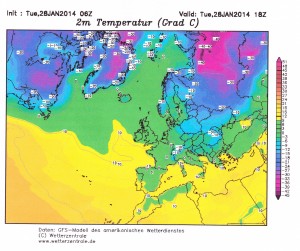 By 2014 the cold over Siberia has intensified considerably, Canada has become much colder, especially Labrador, and the 10C isotherm is now across south west England with a finger of colder water trying to approach north western Spain.

The increased thermal gradient between pole and equator has spawned exceptional storminess in the approaches to Western Europe resulting in little frost or snow there but no exceptional warmth either.

Note that Anthropogenic Global Warming Theory proposes greatest warming at the poles so there is clearly something wrong with that theory.

However, the sun has been less active of late.